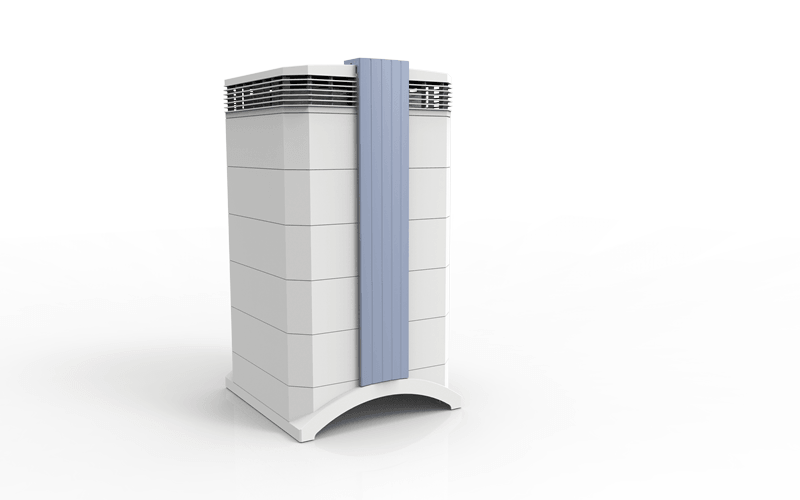 The Gas and Odour Specialist

The GC MultiGas has been customised for wide spectrum molecular and particulate contaminant control.

Just like a professional gas mask, the GC MultiGas maximizes molecular filtration for a wide variety of gaseous chemicals and odours with its advanced filter cartridge design.

And while gas and odour control is the particular strength of this model, the GC MultiGas also offers excellent filtration for particles.

The GC MultiGas is our bestseller for individuals with multiple chemical sensitivity (MCS).

Product Inquiry
I need clean air now!
Get a quote 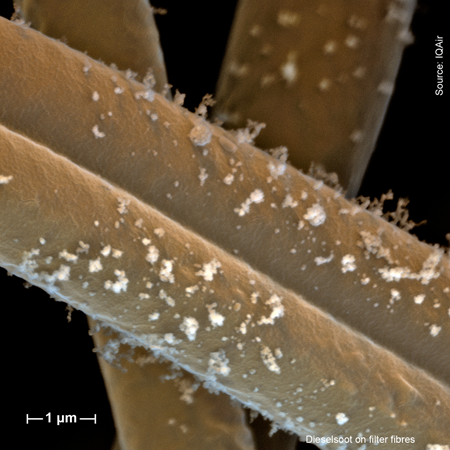 Manufacturers of ordinary air filtration systems claim only that their systems filter particles larger than 0.3 microns. IQAir is different. IQAir’s HyperHEPA filtration is proven and certified to filter up to 99.5% of all particles down to 0.003 microns – the smallest particles that exist. Independent testing by laboratories and government agencies verifies the effectiveness of IQAir technology against ultrafine particles. When it comes to protection against ultrafine particulates, IQAir is the proven choice. 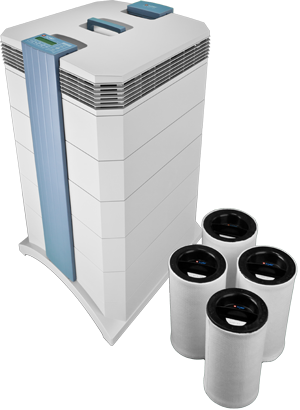 The extraordinary performance of the IQAir GC Series begins with the highest quality, exceptionally porous, activated bituminous-coal carbon in its gas-phase filtration cartridges.

This is not the lower-cost, high-dust carbon from coconut shells that many air purifiers use. That's good news for anyone allergic to coconut.

Also, IQAir does not use zeolite, another less effective and less expensive filtration medium. The superior activated carbon media in the GC Series is blended with chemisorbers that target volatile organic compounds in the air, including formaldehyde.

Up to 100X more filtration than ordinary HEPA

Unlike other air purifiers, IQAir's HyperHEPA filtration system is proven to stop the smallest, most harmful particles in the air, all the way down to 0.003 microns – the smallest particles that exist.

We don't just claim it, we prove it in rigorous independent testing.

Certified before it leaves the factory

IQAir individually tests each and every GC Series air purifier at the factory to ensure that the performance of each system meets published specifications.

Electronic laser particle counters sample the air at the air purifier outlet to verify that the system is performing to efficiency standards in reality, not just theory. If the system is not performing as stated, it is not shipped.

The results of each test are detailed in a hand-signed Certificate of Performance, which is shipped from the factory in the box with every GC Series system. 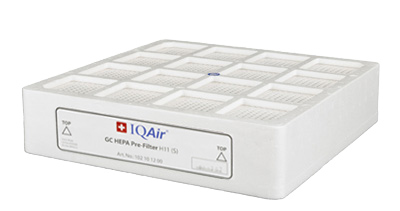 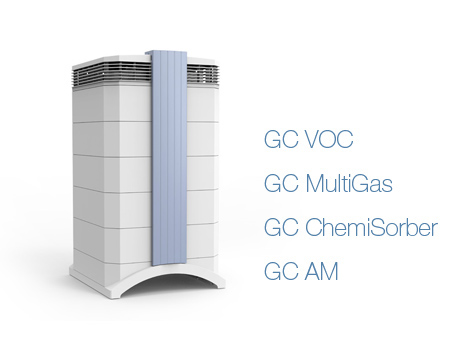 GC AM  (for control of ammonia and ammonia compounds)

The IQAir H11 HyperHEPA Pre-Filter is a critical feature of every GC Series air purifier and provides medical-grade filtration of particles of all sizes in addition to the specific gas-phase filtration of each configuration. 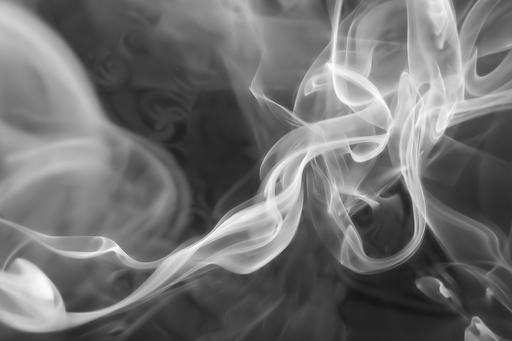 Exposure to environmental tobacco smoke, also known as secondhand smoke, significantly increases the risk of lung cancer and heart disease in non-smokers, as well as contributing to respiratory illnesses.

Tobacco smoke contains more than 4,000 different chemicals, 60 of which are known carcinogens. These various elements are a mix of liquids, gases, and solid particles.

An air purifier cannot help protect against tobacco smoke unless it provides a high level of efficiency against both particles and gases. The IQAir GC MultiGas offers unrivaled protection against both particles and gases. The Johns Hopkins University School of Medicine recently reported that an air purifier can be as effective as drugs in reducing asthma attacks among children in homes where one or more parents smoke. On average, the children in the study suffered 33 fewer days per year enduring severe asthma. 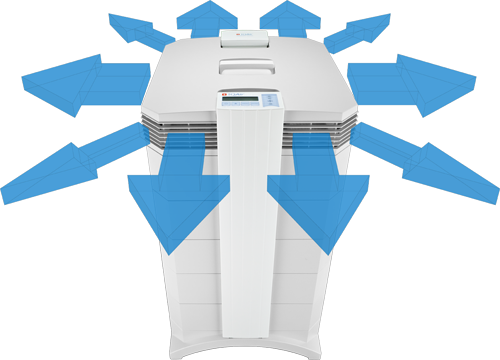 Most air cleaners return filtered air into the room through a small, noisy outlet.

The IQAir GC Series was designed with a 320-degree EvenFlow Diffuser to supply more air in more directions without drafts or noise.

Other systems create annoying air drafts and restrict the ability of a system to produce fresh, clean air that can fill the room.

IQAir GC Series air purifiers are designed to clean the full spectrum of airborne pollutants with the very best filtration technology available at each stage of filtration.

Air is drawn into the GC Series air purifier through the bottom of the system by a powerful New Edition IQAir fan. Then the air pulled into the system is sequentially cleaned in a step-by-step process that delivers clean, healthy air. IQAir's unique no-leakage design prevents air from escaping back into the room without being drawn first through the GC Series filters. The multiple filtration stages include:

IQAir’s HyperHEPA filtration technology is the safest, healthiest and most effective way to clean the air.

The GC Series particle filters work together to remove more than 99% of all airborne particles (0.3 microns and larger) without using unsafe or unproven technologies such as ozone generation, ionization, or ultraviolet radiation.

The micro-charged post-filters in the GC Series systems eliminate any particles that might be released from the carbon and alumina gas, odor, and chemical filtration stage.

IQAir GC Series air purifiers produce an average of 32% less sound across all fan speeds compared to previous generations without sacrificing filter life or system efficiency. The result is clean, healthy air without disrupting the environment with noise.

Rubber suspension pads systematically isolate motor vibration from the air cleaner housing. The EvenFlow Diffuser deflects sounds back into the system while returning low turbulence and low velocity air to the room.

The result is an air purifier quiet enough for any commercial environment.

Swiss Made is more than just a label of origin.

It is a sign of outstanding quality, uniqueness, superior design, innovation, precision and reliability. In an industry in which most air cleaners don't meet manufacturers' claims, IQAir tests and certifies each and every IQAir air purification system.

All manufacturing is done in IQAir’s own state-of-the-art Swiss production facility on the pristine shores of the Lake of Constance.

By using the highest quality components, a dedicated team of highly skilled and extensively trained craftsmen and women, and state-of-the-art manufacturing processes refined over 50 years, IQAir is able to build the finest air purifiers in the world. 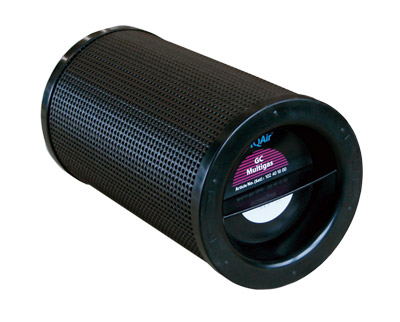 All GC Series air purifiers feature IQAir’s revolutionary modular tower design that snaps open to allow access to all of the system filters in a matter of seconds.

By simply releasing the locking arms and sliding the filters out of the frame, almost anyone in the office can replace any of the GC Series filters in moments without special tools or complicated processes.

Color-coded lights on the control panel also make it easy to know when each of the filters needs replacing.

Even though IQAir GC Series air purifiers are very powerful, they cost very little to operate. They require no more power than a conventional light bulb.

At the heart of these air purifiers is the ultra-efficient, centrifugal, high performance IQAir New Edition fan and its maintenance-free motor.

This mechanical powerhouse delivers up to 400 cubic meters (with filters) of air per minute while requiring as little as 27 watts of power at the lowest speed and up to a maximum of 215 watts at the highest speed.

As a result, it costs only pennies per day to run the most advanced all-around air purifier in the world. 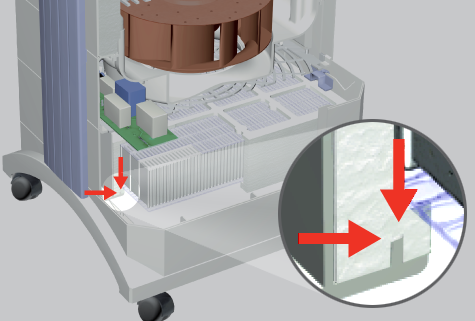 The efficiency stated for most air cleaners is purely theoretical.

First, a unique process ensures that the filter media is 100 percent sealed in the filter frame.

As a result, IQAir systems have a total system efficiency that is higher than the theoretical efficiency of conventional air cleaners.

Because each fan is individually balanced and uses steel ball bearings, it outlasts other fans by years.

The IQAir New Edition fan is suspended in a housing unit that isolates the fan from the housing with eight shock absorbers to further reduce noise.

This helps cut energy costs and extend filter life – the GC Series air purifier can be programmed to clean the air exactly as needed when needed.

Also, the included intelligent filter-life monitor precisely forecasts filter replacement based on actual usage and color-coded lights indicate when it's time to change each filter.

The built-in guiding handle on top and sturdy casters on the bottom of the GC Series systems make them easy to roll anywhere they are needed in the environment to provide high-performance air purification.

And when not needed, the GC Series easily rolls into a utility closet or other handy storage area.

A sleek and efficient handheld remote control makes it easy to manage an IQAir GC Series air purifier from almost anywhere in the environment.

Users can set the fan speed and even timer controls without touching the system itself.

When not in use the remote control fits easily in the recesses on the top of the system, where it can be found again quickly when needed.